The Big Trick Behind Exploit MS12-034

The Big Trick Behind Exploit MS12-034

In this post, I'm going to share a deeply technical explanation regarding the challenging work involved in exploiting a Windows-based vulnerability I discovered (CVE-2012-0181) and how it was exploited within Windows 2003, Windows Vista and Windows 2008. Although this is a first-time publication of these findings, you might be interested to know that the attack vector was the same used by the infamous Stuxnet worm to exploit a bug (MS10-073 and CVE-2010-2743).

KeyboardLayout functions The "LoadKeyboardLayout" function allows a program to load non-default "keyboard layouts". We've addressed this in prior CORE Labs advisories including CVE-2010-2743. The syntax for this function:

Here, the string 'pwszKLID' holds the identity of the keyboard to be loaded (e.g., the English layout is '00000409') and the parameter 'Flags' specifies how the input locale identifier is going to be loaded. The 'LoadKeyboardLayout function', located in 'USER32.DLL', is only the highest-level interface to load a new keyboard layout. However, the function is actually a wrapper for the wind32k system call (syscall for short) 'NtUserLoadKeyboardLayoutEx'. Accessing this syscall is straight-forward, and in Windows 2003 can be done with the following code:

Depending of the OS version, the system call accepts seven or eight  parameters, whereas 'LoadKeyboardLayout' accepts only two. Of these additional parameters, there are three that play a role in this vulnerability:

The Bug
The bug is located in the 'ReadLayoutFile' function, which is part of the 'win32k.sys' kernel module. This function has a custom-built PE loader. When the index parameter is used by the PE loader, the bounds are checked as follows:

If this pointer is in the bounds of the keyboard layout, the "PE loader" continues with the same process, until the table is refreshed (12 or 13 pointers). If this pointer is out of the bounds, the function 'ReadLayoutFile' deallocates the keyboard layout and returns ERROR. Since we control index, the range checked is insufficient, so the bug could be used to overwrite one, two or three bytes out of the memory allocated by windows. This kind of bug is called  an off-by-one bug, or more generically: memory corruption.

A little bit of theory first
This picture depicts a snapshot of the paged memory pool in the Windows kernel heap: 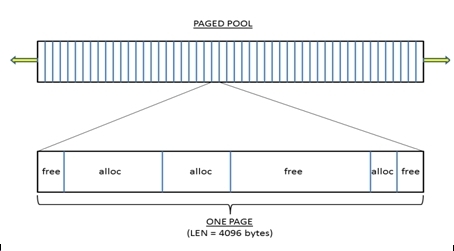 Each of the pages in the paged pool represents a memory block. Each block holds 4096 bytes (4 kB). When writing into the paged memory tool (e.g., "mallocs" executed by the Windows kernel itself), one necessarily takes the whole block into memory. The paged (memory) pool is a memory resource that the OS uses to store data: “The kernel’s pool manager operates similarly to the C-runtime and Windows heap managers that execute within user-mode processes.  Because the minimum virtual memory allocation size is a multiple of the system page size (4KB on x86 and x64), these subsidiary memory managers carve up larger allocations into smaller ones so that memory isn’t wasted.” When low in (virtual) memory, the system can thus write these pages to disk (physical) and free some space. Let’s say we did use the 'NtUserLoadKeyboardLayoutEx' syscall; so that the .DATA section (of the keyboard layout) was allocated as one of the chunks depicted in Figure 1 (here the keyboard layout was mapped in a kernel memory address represented by a painted square): 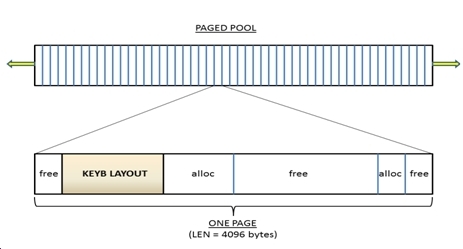 Each memory chunk is depicted as a rectangle. The first eight bytes of each chunk contain a header that we represent by line separators: 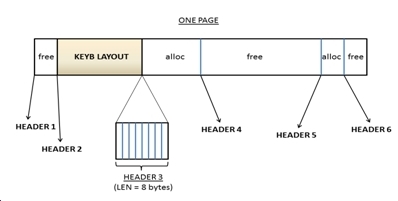 In turn, the chunk header has the following structure: 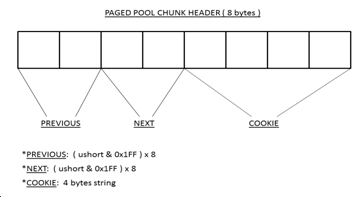 The first half of the chunk header consists in two pointers:

We note that actually only 9 bits are used to represent the chunk size, the remaining 7 bits are used as an index which determines the block which they belong to.

After describing the setting we are ready to get into the most complex and interesting part: the exploitation. This will take a few steps and I’ll describe solving the several challenges  as they appeared to me. Step 1: HEAP Corruption - Part 1 As you may recall, using 'NtUserLoadKeyboardLayoutEx' we may overwrite 1, 2 or 3 bytes at the end of the chunk. Recall that at the end of each chunk, there follows a new chunk, that this chunk starts with a header, and that the first two bytes in this header are used to locate the previous chunk. For example, if we managed to overwrite the header of the chunk after the keyboard layout file, then the previous field of this chunk’s header should point to the keyboard layout allocation: 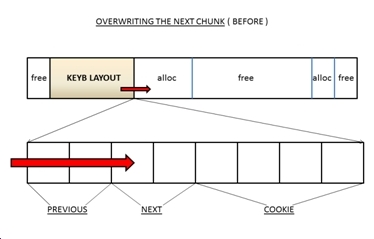 Here, the red arrow represents what the bug allows us to overwrite.

Step 2: HEAP Corruption - Part 2
Let's analyze what is the impact of overwriting the first byte of the next chunk header. Consider, for example, that we are using a keyboard layout file of 0x178 bytes in size (so the associated chunk containing the file plus the header is 0x180 bytes in size) 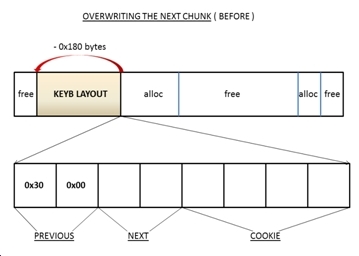 Since 0x180 (384 decimal) divide by 8 is 0x30, there follows that the previous field should hold the value 0x30 (or 48 decimal). Suppose that we overwrote the first byte with another value, say 0x10, then, the previous field header would point to some place within the keyboard layout chunk:

Obviously this is an unexpected behavior. According to this assumption, a new chunk would start at -0x80 with its own header: 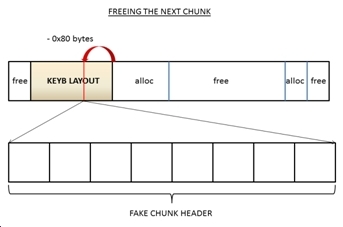 Step 3: "Exploiting" the HEAP
If we overwrite the previous field on the next chunk header, two very different things can happen depending on what chunk is deallocated next (memory will be freed sometime after the chunk is used): 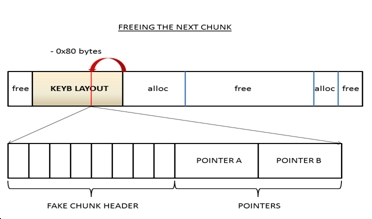 When the chunk is deallocated, the memory looks like this:

So, if we controlled the memory area content where the fake header is read, we could control the value of these 2 pointers (A and B).

We can break the exploitation problem in the following three sub-problems. First: When deallocation happens, we need to avoid the keyboard layout chunk so that the next chunk is deallocated. The former situation would lead to a BSoD and end our hope for getting the exploit to work. So we need to somehow provoke for the next chunk to be deallocated. Second: After doing the off-by-one, we do not know the value of the first byte in the NEXT chunk header. We need to estimate this value so that we know where it will point. Third: We don't control the (keyboard layout) DLL content, so where will we write our payload? The implication of this is that we can't create a fake chunk header pointing into the DLL area, because this file is not writable. Hence, exploitation will have to go through some other means. On the other hand, we might be able to find, somewhere in the .DATA area, data consistent with a chunk header followed by two pointers and then have the byte used to overwrite the next chunk header to point to this (fake) chunk header.

Solving problems 2 and 3
Assume for now that we have solved problem 1; we’ll figure it out next. Then, problem 2 has a neat and interesting solution, which goes as follows. We know that the highest byte of the refreshed pointer is the first byte that we used to overwrite the next chunk header. We also know that the address is pointing somewhere in the kernel, and therefore this value must be bigger than 0x80000000. Hence, we can deduce that the highest byte will hold a value between 0x80 and 0xff. For the heap coalesce, it is sufficient to control the memory area before the keyboard layout file and build the fake chunk header and the two pointers within that memory area. Assuming we can control allocations before the keyboard layout, we face the following situation: 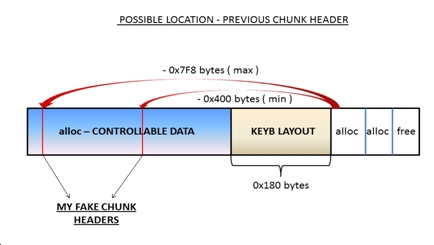 To solve problem 3 note that we needn't overwrite the DLL content, because if it is sufficient to find a DLL with a .DATA section located less than 0x400 bytes away. This is because the minimum byte value used to overwrite the next chunk is 0x80 (128 decimal), and 0x80 times 8 is 0x400 (1024 decimal). So that when the 'ExFreePoolWithTag' function finds the fake chunk header, it would be out of the keyboard layout chunk.

Problem 1 is much more difficult because there isn’t a way to avoid the deallotation of the KEYBOARD LAYOUT CHUNK. The solution is achieved using a neat surgically-crafted heap spray technique. Say that the KEYBOARD LAYOUT is allocated exactly at the end of the memory page like this: 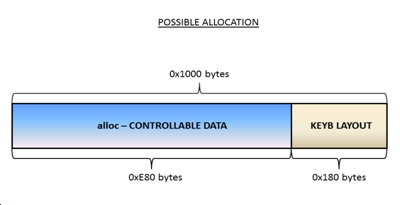 If this happens, the overwritten next chunk header is allocated in the next memory page (next 4 kB). 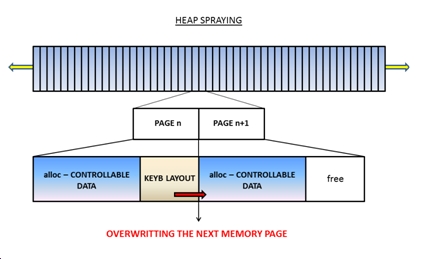 In this case, the keyboard layout chunk will be inevitably deallocated, but Windows will not do the sanity check since it is not needed. In this way we can avoid the BSoD as 'ExFreePoolWithTag' function deallocates the (fake/corrupted) next chunk. Since the next chunk header starts exactly at the beginning of the next memory page, the previous field value should be 0. Even though the chunk is located at the start of the page, the 'ExFreePoolWithTag' function will use the previous field to find a previous chunk header. So, this innocent-looking check allows us to use a fake chunk header and point to the previous memory page, the page where the keyboard layout was allocated. This is illustrated by Figure 13: 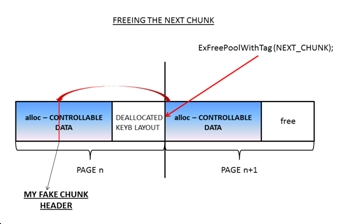 As a result, we can use POINTER 1 and POINTER 2 to overwrite a memory address with a specific value. Once a specific memory address was written, there are many ways to take control of the Windows kernel, for example, by overwriting the Service Description Table (SDT) table. That may be known by many, and for the rest, it is a story for some other time.