In this blogpost, we’ll briefly describe how we developed a DoS module for CVE-2022-21907. Instead of viewing it in a result-oriented way, we’ll approach it from a research standpoint, describing the process of developing this module for Core Impact.

On Jan 11th 2022 Microsoft released a Security Update for a RCE vulnerability (CVE-2022-21907) in http.sys. According to Microsoft, this vulnerability affects the following Windows Versions:

This is a long list! What’s more, they say that its exploitation is likely, as “an unauthenticated attacker could send a specially crafted packet to a targeted server utilizing the HTTP Protocol Stack (http.sys) to process packets.”

Because we like numbers and graphs, let’s do a quick Shodan query: 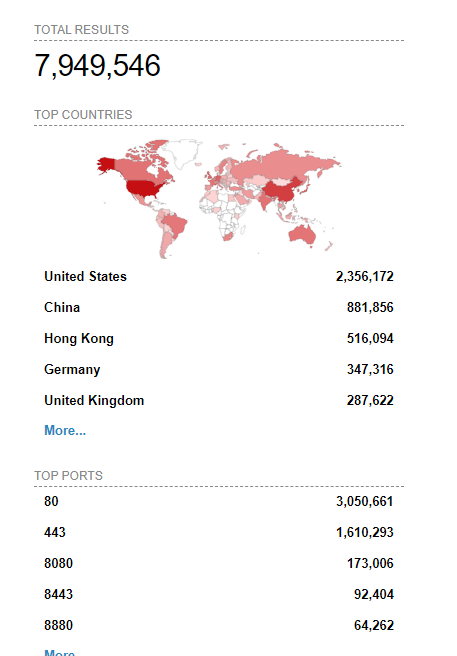 The results show many possible targets!

Given its impact, we decided to spend some time analyzing this vulnerability.

The first thing to do was to understand the nature of the vulnerability and collect all the public information about this CVE.

From the Microsoft website, we can infer that this vulnerability is related to HTTP Trailers:

After finding that this vulnerability is related to HTTP Trailers and before doing a diff between the vulnerable http.sys and the patched one, we started to read all the things related to trailers from the HTTP RFC. While doing this, a few Proof of Concepts (PoCs) for this CVE appeared on Twitter and Github.

All of these PoCs were doing the same thing in order to crash the vulnerable machine:

As can be seen above, it only requires a simple GET request with a special Accept-Encoding.

This was a bit weird. Not only was it incredibly similar to CVE-2021-31166, they were also not using trailers.

Anyway, we then decided to try one of the PoCs. A Windows 10 20H2 was installed without patches and then the IIS server was configured. After that, I used one of the PoCs and the target crashed. 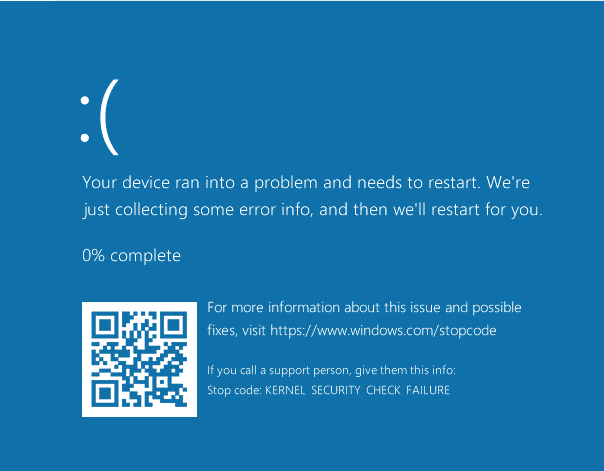 Analysis of the the crash with Windbg showed it was identical to CVE-2021-31166. 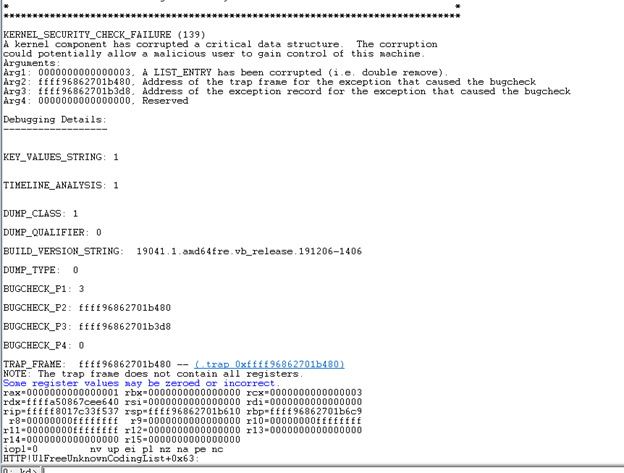 After all of these things, we started to wonder why there multiple PoCs with a large number of stars and forks that people kept retweeting. Moreover, even the MITRE website referenced this PoC.

Honestly, for a moment, we thought we were missing something. It turns out, we were right—it was CVE-2021-31166. So we continued with the following step, which is the diffing between the vulnerable http.sys and the patched http.sys.

We took a snapshot, moved the vulnerable http.sys to another machine, and then patched the machine. After that, we moved the patched http.sys as well and reverted the snapshot.

After doing the diff between these two versions, we got the following result: 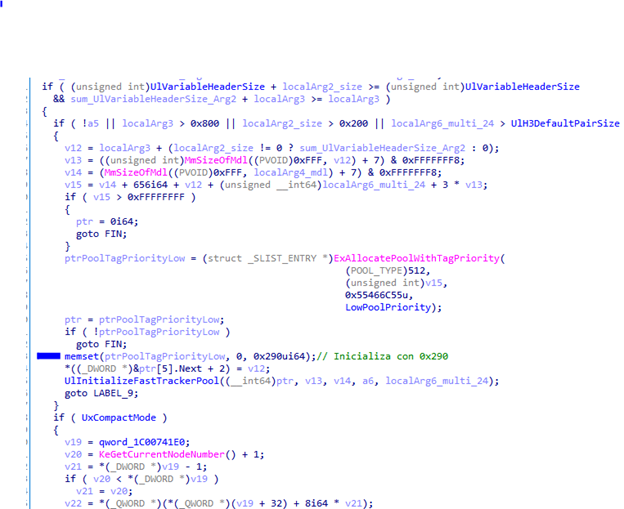 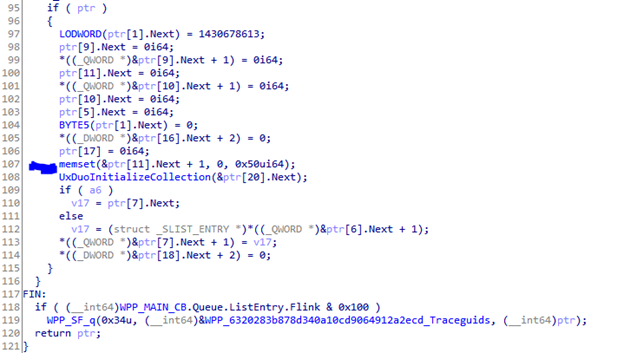 Therefore, these two memsets hinted that a problem with an uninitialized chunk allocated with this function might be present in the vulnerable version. Perhaps it was used as part of the CVE or maybe they realized it when they were patching the vulnerability. We could only try to guess.

This was interesting too! They were related and there was one additional call to UlpAllocateFastTracker in the patched version.

This was a good sign. We decided to analyze UlFastSendHttpResponse. We won’t get into the details here because it’s really large, around 3k lines. In addition, we didn’t reverse it completely because we decided to switch to a dynamic approach after initial analysis showed it would take a significant amount of time to understand the whole process. Instead, we tried a dynamic approach first. To provide a high level explanation, when you do a request to the server, it uses this function to send you the response.

Trying to create a PoC

This was easy to test, we put a hardware breakpoint in the beginning of UlFastSendHttpResponse and did a basic request.

After this, we decided to do code coverage of the driver. 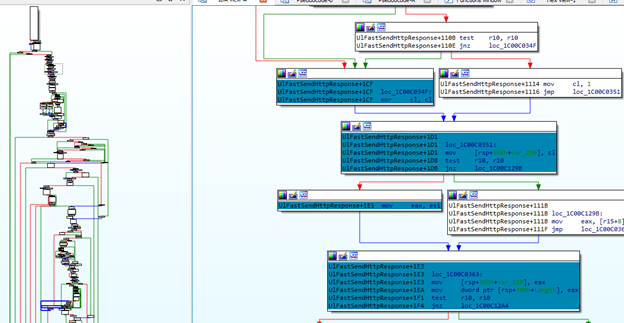 The code reached was almost always the same.

Then we decided to use the information that Microsoft provided. They told us that it is related to Trailers. We continued reading about Trailers in the HTTP RFC and started experimenting with Trailer requests.

With that knowledge, we added that to my fuzzer and ran it again. The code flow changed and we were hitting UlpAllocateFastTracker but nothing weird was happening. We did a lot of debugging and still nothing. We were completely lost. It was time to spend time reversing the functions involved and get more knowledge.

While doing that, on January 26th, something new about this vulnerability was published by CoreLight:

Apparently, they had access to an RCE exploit or maybe just access to information about the exploit. It proved quite helpful, explaining two key pieces of information:

1. “The exploit works by spraying an IIS server via several large GET HTTP requests and finishes with a malformed HTTP request.”

2. “The malformed HTTP request in this exploit is missing the ‘HTTP/1.1’.”

Point number one means that for Trailers requests, we can send large GET HTTP requests. We can just change our values to big numbers and payloads. We were using low numbers before, so we expected this to make a big difference!

Point two was the true magic.  We did not use any malformed http requests. Moreover, it tells us about the error ‘Missing HTTP/1.1’. This was a BIG HINT.

So, it was time to change our fuzzer logic and try again!

After fuzzing for a while, we got a crash:

After analyzing the crash, we confirmed that the problem was the lack of initialization, which is what we hypothesized after doing the diff.

Let’s go into what was going on with the crash.

Here’s some of the stack trace:

It seemed that the problem started inside MmUnmapLockedPages.

Let’s look at HTTP!UlFastSendHttpResponse+0x2e872 in order to understand the context: 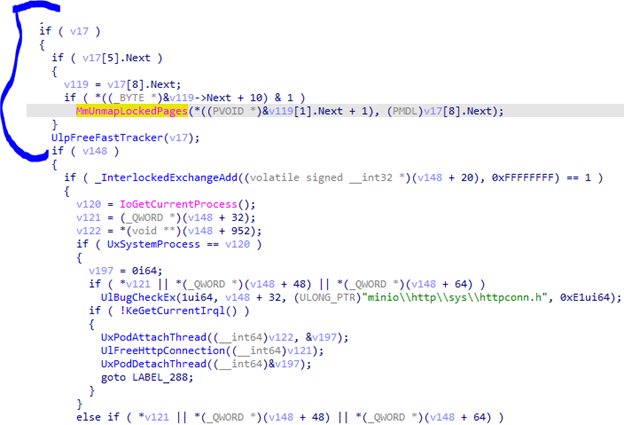 We could infer that v17 is the FastTracker chunk allocated with UlpAllocateFastTracker because of UlpFreeFastTracker. So, our PoC entered to that if(v17[5].Next) and then called MmUnmapLockedPages.

We changed the code a bit to have better semantics:

So FastTracker + 0x50 must be different to 0 in order to enter the block where MmUnmapLockedPages resides. However, there is another piece before that. What’s that v119?

Well, we could see that it was something inside FastTracker (FastTracker + 0x80) and that IDA parsed it as PMDL in MmUnmapLockedPages. It seemed to be a pointer to an MDL (Memory Descriptor List). 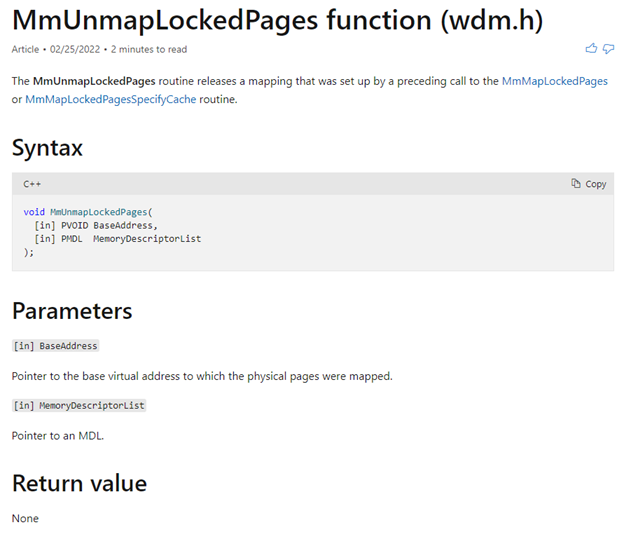 We then modified our pseudo-code again:

Just changing the data type IDA identified that it was doing mdl->MdlFlags & 1.

Consequently, we had two conditions to reach MmUnmapLockedPages:

Our PoC reached MmUnmapLockedPages, so we then checked the values: 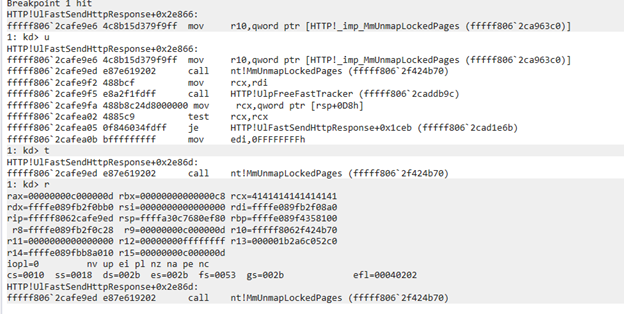 Obviously, this would generate bad behavior. Additionally, we could see the pointer of the MDL (rdx).

Next, we parsed it:

Well, this was bad.

We’ll stop here with our crash analysis. If you continued analyzing it, you would find that it was a problem with an initialization of an MDL. The key is inside UlInitializeFastTrackerPool.

After figuring out what was happening, we developed the module for Core Impact.

Because we released it a long time ago and because the patch is from January, we will release a python script for testing your systems. Then, if you want to check if your systems are vulnerable, the PoC is available below and on github.

Regarding RCE, it is possible, hard and unstable, but possible. We are still researching a way to do something reliable. In addition to that, it is necessary to mix this vuln with an infoleak.

Another idea that’s easier than a RCE is to try g to create a LPE. We can leak the offsets of our chunks using known techniques and manage the pool better.