Core Labs has completed an in-depth analysis of two Microsoft vulnerabilities, CVE-2019-1181 and CVE-2019-1182, which were patched in August 2019. These vulnerabilities are particularly interesting and worth further assessment because they affect OS versions ranging from Windows 7 to Windows 10 1903 (x86, x86-64 and ARM64).

We began our research by choosing Windows 7 SP1 as target, because Windows 7 SP1 has less exploitation mitigations than Windows 10 1903. While working on this research, we made two discoveries:

The second issue reduces a lot of the impact for Windows 7 SP1/Windows Server 2008 R2 SP1 targets. The default installation isn’t vulnerable. In order to exploit this server, it is necessary to upgrade RDP to RDP 8.0 or RDP 8.1 (Remote Desktop Protocol (RDP) 8.0 update for Windows 7 and Windows Server 2008 R2). Therefore, we decided to switch its focus to Windows 10 1903, using the latest version of Windows 10 as an opportunity to learn more about Windows exploitation.

We began our research with Windows 7 SP1 in mind, beginning with finding the vulnerable function. The first thing to do when analyzing a patch is a diff between the vulnerable version and the patched version in order to detect changes between them.

This specific analysis was initially completed by another researcher (DejaBlue: Analyzing a RDP Heap Overflow).Briefly, this analyst found that the vulnerable function is DecompressUnchopper::Decompress which is in RDPCoreTS.dll.

We completed the binary diff in Windows 10 1903, finding that the method DecompressUnchopper::Decompress wasn’t in RDPCoreTS.dll, and was instead located in rdpbase.dll. 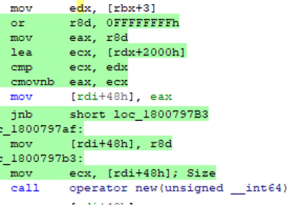 Figure 1 represents the vulnerable function. By moving a value from [rbx+3] to eax and then adding to it 0x2000, this value will be used by the new operator as a chunk size. The problem is that the attacker can control the value of [rbx+3] and, therefore, generate an Integer Overflow.

Below is the pseudo code/reversed version:

If you pass a value in the range [0xFFFFFFFF-01FFF, 0xFFFFFFFF], you will generate the Integer Overflow. You can take advantage of this by reading where this chunk is used. By taking a look later in the code, you will see the memcpy:

The Connection Sequence has 10 phases:

In this phase, using the Client MCS Connect Initial PDU with GCC Conference Create Request, you can specify which static virtual channels you will use. Then the server responds with a Server MCS Connect Response PDU with GCC Conference Create Response where it defines the ID of the I/O Channel and the ID’s for each static virtual channel requested.

Then the server responds with a Server MCS Channel Join Confirm PDU.

In this optional phase, the session keys that are used to encrypt and validate the integrity of RDP traffic are generated.

This phase is optional with a goal of detecting different characteristics of the network.

In this phase, the server sends a Server License Error PDU - Valid Client.

This optional phase can be used if the server chooses to use multitransport connections.

The server sends a Server Demand Active PDU and Monitor Layout PDU indicating which capabilities supports. Then, the client sends a Client Confirm Active PDU and a Server Synchronize PDU.

When the connection sequence is done, you can send data over the static virtual channels.

After the channel is opened, the client can send/receive data over it.

You can send data over the dynamic virtual channel by using DVC Data PDU (DYNVC_DATA).

Returning to the vulnerability, you now need to send compressed data because the name of the vulnerable method is Decompress.

After some reversing, we found that to reach the vulnerable function and generate the heap overflow you must use MULTIPART (0xE1) as descriptor in RDP_SEGMENTED_DATA. Also, the [rbx+3] is the member size of RDP_DATA_SEGMENT. Put a value in the range of [0xFFFFFFFF-0x1FFF, 0xFFFFFFFF] to generate the integer overflow and after the heap overflow.

Now, you’re able to create the evil packet and trigger the heap overflow: 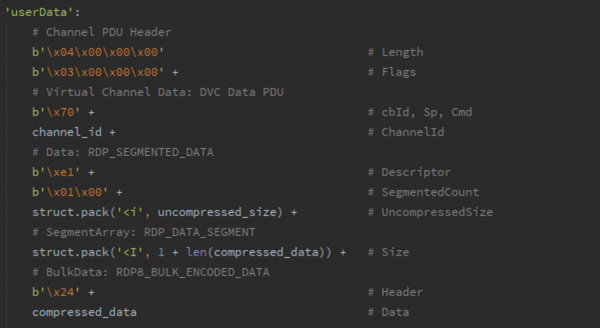 After attaching WinDbg to the suitable svchost.exe process and sending the packet, you can see that the heap overflow has been triggered and generates a crash!
Image

What are the next steps?