Windows has been around a long time. After years of evolving from one version to another, it is rare to find vulnerabilities that allow remote code execution from Windows XP to Windows 8.1 (32 and 64-bit) without any user interaction. In this blog post, I'm going to explain what I had to do to exploit this bug fixed in MS15-011 by Microsoft, integrating and coordinating the attack in one module. It should also be noted that on February 10, 2015 Microsoft released 9 fixes for their software including SMB.

Patch installed but not configured?

Although this fix was released some months ago, if the fix was installed but the "Hardened UNC paths" weren't configured, the user is still vulnerable to this attack. For the correct configuration, you can skip to the section "Configuring UNC Hardened Access through Group Policy" in this Microsoft Support article.

When a computer joins a domain (e.g. "corp.contoso.com"), usually the client asks the domain controller for new policies (GPOs) via SMB. The file requested by the client is "gpt.ini", which is usually located at "\\DOMAIN_CONTROLLER\SysVol\corp.contoso.com\Policies\{UUID}". The file content is small and almost always is similar to this:

When the fix was released, Microsoft gave a typical attack scenario, a "coffee shop". The victim machine asks for the "logon.bat" file to "Target Data system" (IP: 10.0.0.100). The attacker also poisons the "Local Switch or Access Point" via an "ARP Spoofing attack". As a result, the SMB client connection is redirected to a fake SMB server and the client finishes executing the "logon.bat" file from a malicious server with the same IP address as the real server (10.0.0.100). It would be interesting to see statistics on how many computers are actually used at coffee shops to log on domain controllers located outside of the local network. Note: In the logging process, the file "logon.bat" is downloaded and executed by clients from the domain controller, as long as the server administrator has enabled this option.

When a policy update is redirected to a new fake domain controller, via a "Man In The Middle Attack", it could send the client nefarious policies and change Windows registry keys, finalizing the attack with code running in the target as "system" user. Why "system" user ? ...Because GPOs are downloaded and applied from a Windows service. One file downloaded in the GPO update is "GptTmpl.inf", it contains a section called "[Registry Values]" where any Windows registry key can be added/changed/deleted.

The goal of this exploit was to coordinate the entire attack in one module, so the user wouldn't have to pass any parameters. After more than two months of work, here’s the result! It was necessary to write:

The objective of this module is to set rules in the default gateway spoofer to redirect TCP/UDP connections to other destinations. In the case of this exploit, the SMB connections will be forwarded to a fake SMB server. The default gateway spoofer module receives data from the network using PCAP, and disassembles network packets using Impacket. This combination allows the module to modify any packet field over ethernet, IP or TCP/UDP/ICMP layer and recalculate the packet checksum to resend it to the network. Thus, a TCP connection can be re-directed to another IP by modifying only a couple of fields, all in the glory of Python.

As I said before, the client finishes downloading new policies from a fake SMB server -- so what is the best SMB server to use? If the attack was launched from Windows, I could share a folder called "\SysVol\corp.contoso.com\Policies\{UUID}" where the UUID should be obtained in runtime. On the other hand, if the attack was launched from Linux, Samba could be used, repeating what we covered earlier. In general, the best option is to have a portable SMB server listening from a different TCP port than 445, redirecting SMB connections to it. This way, problems can be avoided when reusing the 445 TCP port, especially on Windows. The fake SMB server that I decided to use was "karmaSMB", it allows file sharing using UNC paths like "\\EVIL_SMB_SERVER\*\..\*\gpt.ini" where paths are ignored and only file names are used. This module was written by Alberto Solino (@agsolino) as a MS15-011 PoC and can be downloaded here.

The registry key overwritten was "AppInit_DLL" located at "HKEY_LOCAL_MACHINE\SOFTWARE\Microsoft\Windows NT\CurrentVersion\Windows". This key is used by Windows each time a program is executed, which allows to inject a DLL in the process memory when it's being launched. In my exploit, the registry value used was "\\DOMAIN_CONTROLLER\evil.dll", where the DLL requested is also redirected to the "Fake SMB server". It was necessary to check some situations because "evil.dll" is loaded by every single program launched in the target, from user programs as "calc.exe" to system programs as "svchost.exe". If the attack was successful, an Impact agent running as "system" user is installed on every vulnerable computer joined to an affected domain controller.

This is a regular scenario, two computers located on the same network segment and the domain controller located behind the default gateway.

You can see "target" and "attacker" directly connected to the "Default Gateway". 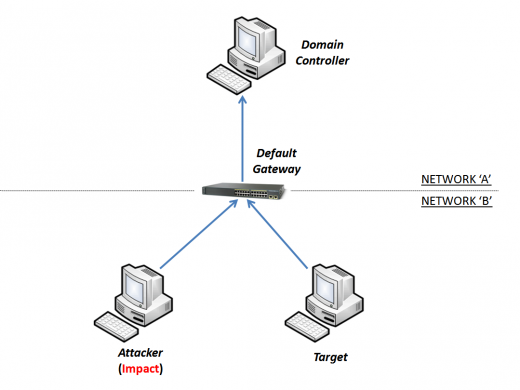 The "attacker" starts the "ARP Spoofing" attack to cheat the "target". 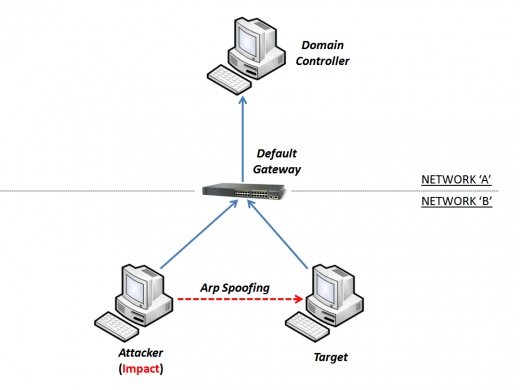 The "target" was cheated and the MiTM starts to work. All connections sent to the "Default Gateway" are intercepted by the "attacker". 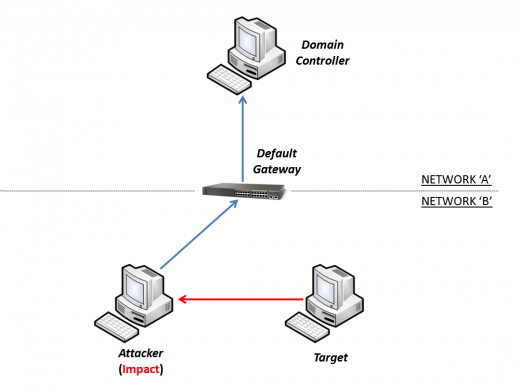 The "target" asks for new GPOs to the "Domain Controller". 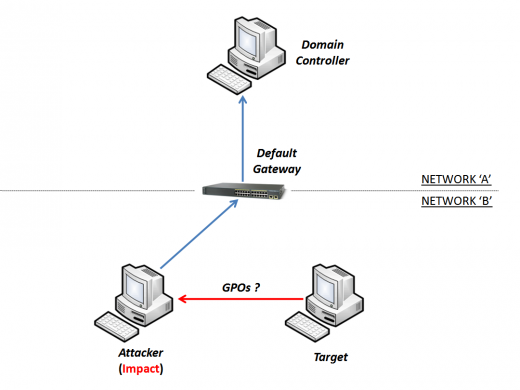 The request for new GPOs is redirected to the "Fake" SMB server.

When the "target" receives new "fake" GPOs, the exploit starts finalizing the attack with the owned target. 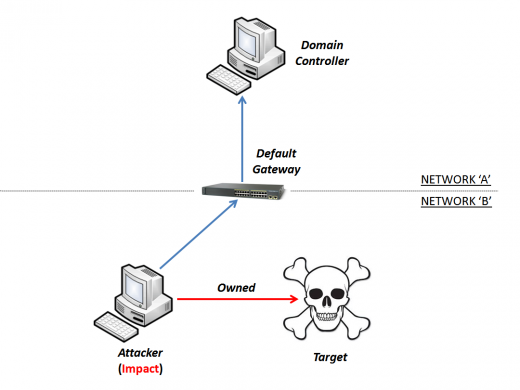 In this demo, we can see the attack/exploit in real time. The target is Windows 7 joined to a domain controller. When it starts, new GPOs are downloaded from Core Impact Pro.

When the fix was released, this attack was demonstrated here. While it’s definitely weird to find bugs remotely exploitable in Windows, it is increasingly common to see exploits that use more than one vulnerability to take control of targets. In this exploit, we could see a combination of:

Explore the latest in Core Impact

Blog
Open Source vs. Enterprise: Why Not All Exploits are Created Equal