At the beginning of March we published a blog post analyzing CVE-2015-0311, a Use-After-Free vulnerability in Adobe Flash Player, and we outlined how to exploit it on Windows 7 SP1 machines. As we mentioned at the end of that article, the exploitation process explained there doesn't apply to more recent versions of Windows like Windows 8.1 with Update 3, because of a new exploit mitigation technology called Control Flow Guard (CFG).

CFG – which was introduced by Microsoft in Windows 8.1 Update 3 in November 2014 – adds a check before every indirect call in the code in order to verify that the destination address of that call is one of the locations identified as “safe” at compile time. If that check fails at runtime, the program detects an attempt to subvert the normal execution flow and exits immediately. Prior to the existence of Control Flow Guard, leveraging a vulnerability like a Use-After-Free into arbitrary memory read & write primitives – as we did with CVE-2015-0311 – used to mean circumvention of ASLR and DEP and ultimately reliable code execution.

The interesting thing about Control Flow guard is that now, even having those powerful read & write primitives, being able to gain code execution may require a noteworthy additional effort. It turns out that the Flash version for Internet Explorer 11 that is integrated into Windows 8.1 Update 3 is compiled with Control Flow Guard enabled, so the well-known technique of overwriting the vtable of an object with a pointer to attacker-controlled data and then calling a virtual function on that object will not work.

Let's find look at how we can bypass Control Flow Guard when exploiting Adobe Flash Player on Internet Explorer 11 running on Windows 8.1 Update 3. This post assumes that you have already read part one, so we are going straight to the point where we are ready to hijack the execution flow of the browser process.

On non-CFG versions of Flash, this is the code that dereferences the overwritten vtable when calling the toString() method on a Vector object, as shown in the previous blog post:

The ___guard_check_icall_fptr function pointer points to ntdll!LdrpValidateUserCallTarget, which is in charge of checking if the destination address for the indirect call is legitimate. When reaching this CFG check with a fake vtable, an attempt to subvert the normal execution flow of the program will be detected and execution will ultimately go to the ntdll!RtlpHandleInvalidUserCallTarget function, which will terminate the process immediately by issuing an INT 29h:

If you want to learn more about the internals of Control Flow Guard I recommend checking out the slides from the talk "Windows 10 Control Flow Guard Internals" [pdf] presented last year by researcher MJ011 at the Power Of Community security conference. 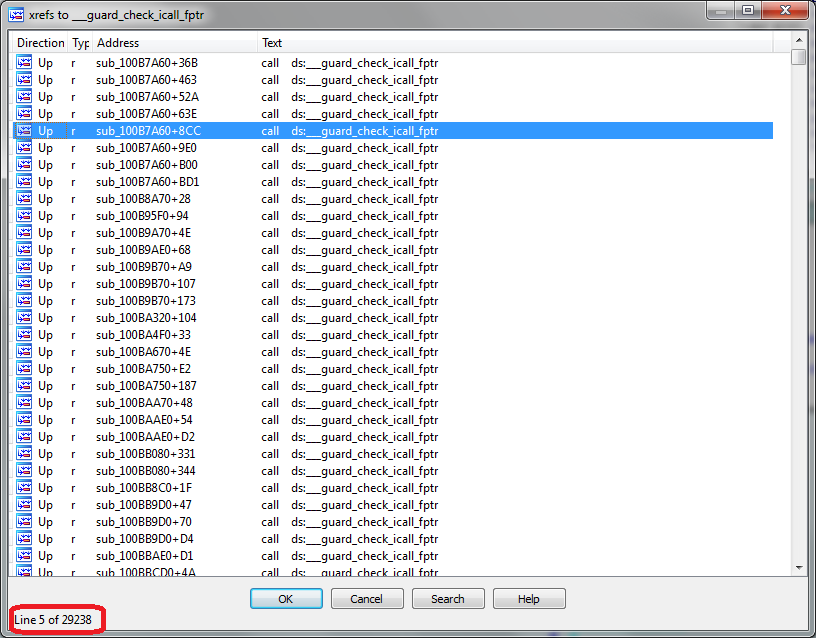 A few different approaches to modify the execution flow when CFG is present:

The first approach requires you to obtain a stack address, which I wasn't able to do having a pointer to an object in the heap as the starting point, despite having arbitrary read and write primitives after corrupting the length of the Vector. The second approach could introduce new dependencies on an exploit beyond the affected software, so it may not be ideal. I did find some indirect calls that are not protected by CFG, like the one below:

So let's go back in the exploitation process to the point where we can modify the metadata of the Vector object. We can set the length of the Vector to 0xffffffff by doing si32(0xffffffff, 0x24). This new length will allow us to read/write from/to any memory address within the address space of the process. Also remember that we have a ByteArray object with our ROP chain stored as the first element of the Vector. The dword stored at this ByteArray object + 8 is a pointer to a VTable object (yes, that's the actual name of the class, as defined in core/VTable.h):

Now, if we examine that VTable_object we can see that it contains a lot of pointers:

If we follow any of those pointers (in the image below I followed the pointer stored at VTable_object + 0xD4) we can see that they all look pretty much the same. These ones are MethodEnv objects (defined in core/MethodEnv.h):

The first dword of this MethodEnv object is a pointer to its vtable, while the second dword is a function pointer (0x601C0A70 in this case). It turns out that the pointer to a MethodEnv object stored at VTable_object + 0xD4 is dereferenced in order to make an indirect call to the function pointer stored at MethodEnv_object + 4 (0x601C0A70), and this indirect call comes from code generated by the Flash JIT compiler, so it isn't protected by CFG! This unguarded indirect call can be reliably triggered by calling the toString() method on the ByteArray object. We can put a hardware breakpoint on read at VTable_object + 0xD4, and when our ActionScript code calls this.the_vector[0].toString(), our hardware breakpoint will be hit when the following JIT-generated code reads the pointer stored at VTable_object + 0xD4. Note how a function pointer is grabbed from ECX+4 and then it's blindly called without first calling the CFG guard function:

That JIT-generated code, which is located on the heap, is reached through the following execution path: method BaseExecMgr::invokeGeneric (defined in core/exec.cpp) calls BaseExecMgr::endCoerce:

And BaseExecMgr::endCoerce calls the JIT-generated function shown before that contains the unguarded indirect call:

This is BaseExecMgr::endCoerce at the binary level:

Now that we know how to easily trigger an indirect call that isn't guarded by CFG, we need to put a fake MethodEnv object at VTable_object + 0xD4. They say that a picture is worth a thousand words, so let's see this in a graphical way. This is the original state:

And this is the state we need to achieve in order to bypass CFG and finally gain code execution: 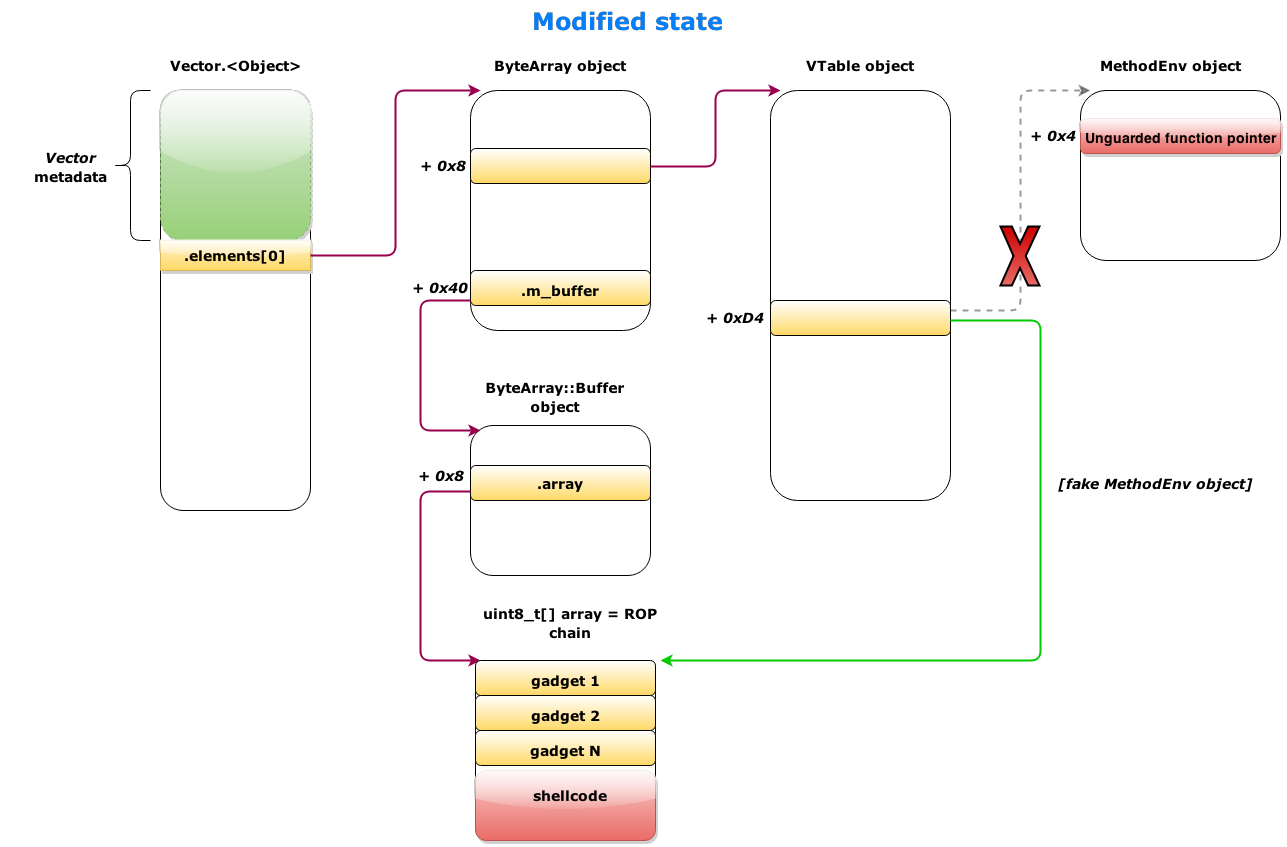 In the ActionScript exploit code we'll read the pointer stored at ByteArray object + 8 by using Nicolas Joly's read primitive based on Number objects, as explained in the previous blog post:

We are overwriting the pointer stored at VTable_object + 0xD4 with the address of our ROP chain (stored in the address_of_rop_chain variable in the ActionScript snippet above). Note that I'm storing address_of_rop_chain shifted 3 times to the right; that is because address_of_rop_chain has type uint, and the ActionScript Virtual Machine internally stores uint values shifted 3 times to the left and OR'ed with 6 (6 is the 'Integer' tag as shown in the previous blog post). Finally, we just need to invoke the toString() method on the ByteArray object , which is stored at this.the_vector[0]. This will trigger the unguarded indirect call from JIT-generated code that will start our ROP chain.

Note that at the moment the unguarded CALL EAX indirect call invokes our controlled function pointer, the ECX register points to our ROP chain, so pivoting the stack and starting the ROP chain is a trivial task.

Control Flow Guard is a promising mitigation technology that will increase the difficulty and the costs of writing exploits. As with every known exploitation mitigation, there are ways to bypass it if certain conditions are met. The approach presented here, which consists of taking advantage of unguarded indirect calls present in JIT-generated code, could be possibly applied not only to Adobe Flash Player, but potentially to any software that makes use of a Just-In-Time compiler, since the code generated by it at runtime doesn't benefit from CFG, unless developers make an special effort to harden the code emitted by the JIT compiler. Note that Flash Player's JIT compiler has been abused in the past more than once in order to bypass mitigation mechanisms; see the "Pointer inference and JIT spraying" presentation by Dion Blazakis (2010) and the "Flash JIT - Spraying info leak gadgets" work by Fermín Serna (2013).