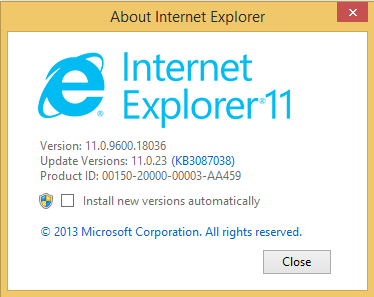 We can see that vbscript!VbsFilter is heavily modified between vulnerable (left) and patched (right) versions:

Its implementation, that is, the vbscript!VbsFilter function at the binary level, does the following:

In both the old and new versions, in the first basic block in yellow, the code calls the VAR::PvarGetVarVal function. That function returns a pointer to the given object's information; the first two bytes pointed by that pointer indicate the type of the object, as returned by the VarType function, e.g.: vbNull (1), vbLong (3), vbString (8), vbBoolean (11), etc. On the left side (vulnerable version) we can see that it grabs the VarType of the first argument, and it applies a mask to it (AND EAX, 2000h, in the red basic block). This way, the vulnerable code is checking if the first argument for Filter is ANY kind of array, since 0x2000 is the base VarType for VBScript arrays. To better understand this, let's read a fragment from the VarType function documentation:

Now, the interesting thing is that, although VBScript can deal with different types of arrays, arrays created by VBScript are ALWAYS implemented as an array of Variants no matter the element type of the array; so if you call VarType(arr) being arr any kind of array created from VBScript, it ALWAYS returns 0x200c, that is, 0x2000 | 0x0C, being 0x2000 = vbArray, and 0x0C = vbVariant. On the other hand, on the right side (the fixed version), we can see that checking if the first argument of Filter is an array is performed in a more strict way: the VarType must be exactly 0x200c or 0x600c (see the red basic blocks). 0x6000 isn't properly documented in MSDN, but it's the base VarType for multi-dimensional arrays in VBScript. So, the patched version of the VBScript engine makes sure that the first argument of Filter is either a uni-dimensional array of Variants, or a multi-dimensional array of Variants. No other array base type is accepted. In other words, it's ensuring that the first argument of Filter is a uni- or multi-dimensional array created from within the VBscript engine. It seems like this patch is fixing some kind of type confusion vulnerability.

So at this point, the question is: is it possible to reach the code shown above with an array whose base type is NOT Variant? In order to do that, we'll need an array created by someone else than the VBScript engine. I googled for "vbscript vartype 8204" (8204 == 0x200C), and the first hit was this thread from Stack Overflow, where some guy asks "Why does VarType() ALWAYS return 8204 for Arrays?". One of the sub-comments is extremely interesting:

This seems promising! VBScript can eventually operate with non-Variant arrays, if they come from other origins rather than the VBScript engine, for example, from an ActiveX object. I tried to obtain a non-Variant array by instantiating some ADODB ActiveX objects as suggested there, like ADODB.Connection and ADODB.Recordset, which are marked as Safe for Scripting. However, despite being Safe for Scripting, when running in the Internet Zone, the user is asked for permission to instantiate these ActiveX objects, so that wasn't going to work, and I dropped the idea of getting non-Variant arrays from ActiveX. After some more googling I found another page, which mentions that content retrieved using XMLHttpRequest, that is, the responseBody property of a XMLHttpRequest object, is an array of bytes, with VarType == 8209 (8209 == 0x2011 == 0x2000 (vbArray) | 0x11 (vbByte)):

So I wrote a first Proof-of-Concept that reaches the vulnerable code with a user-controlled array whose VarType is 0x2011, different than assumed 0x200C. It creates a XMLHttpRequest object from JS, uses it to obtain arbitrary data from our web server, and the resulting responseBody array is passed on to the VBScript code. The VBScript code shows a MessageBox to confirm that the VarType of said array is different than 0x200C, and it finally calls the Filter vulnerable function, with the responseBody array as the first argument.

After reaching the vulnerable code using this PoC, the VBScript engine checks if the given array has 1 single dimension, and if that condition is true, then it calls vbscript!rtFilter:

After entering vbscript!rtFilter, we reach the following code. The ECX register is pointing directly to the raw data we've requested via XMLHttpRequest, and the VAR::BstrGetVal function is called. This function attempts to return the string representation of any kind of VBScript object. That means that at this exact point, and due to the type confusion vulnerability, arbitrary data controlled by us will be interpreted as a VBScript object. 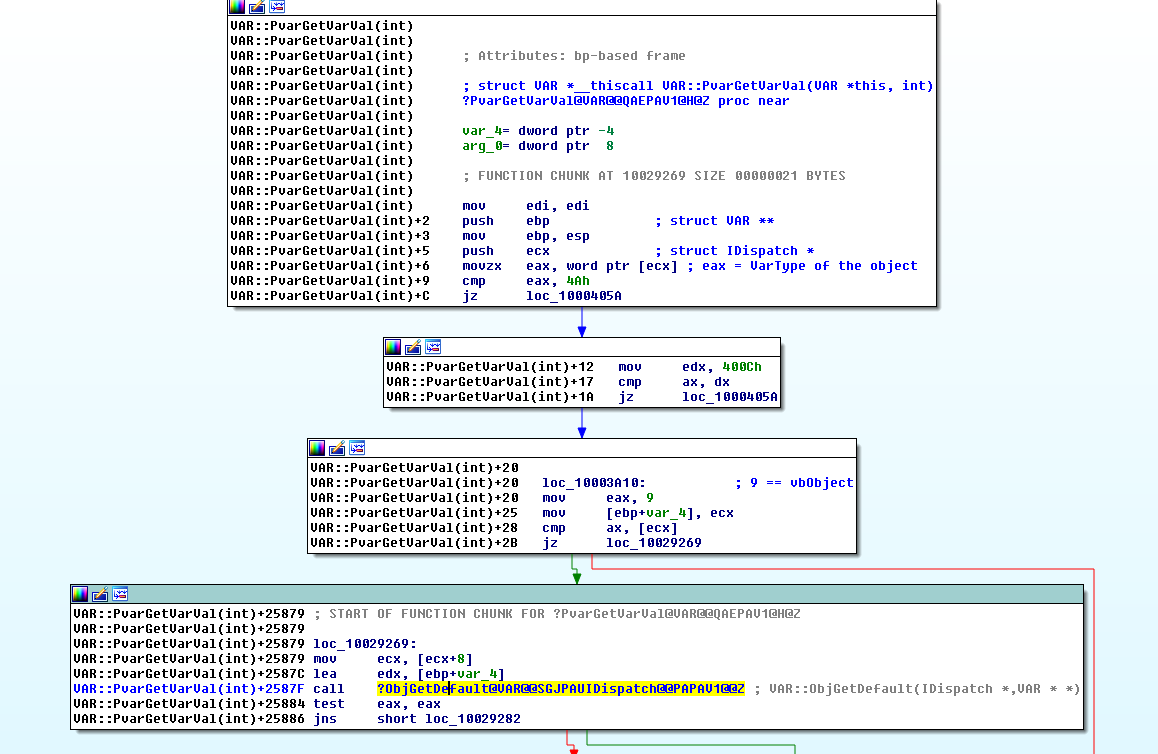 Note that two instructions before calling VAR::ObjGetDefault (highlighted in yellow) there's a MOV ECX, DWORD [ECX+8] instruction. Remember that at that point ECX was pointing directly to our data, so that instruction loads a DWORD from offset 8 of our data into ECX. We enter VAR::ObjGetDefault, and we reach this exciting basic block:

The cool part is that we've got full control over the ESI register and there's an indirect call based on it, so that means remote code execution (assuming that we can find a way to bypass ASLR); the bad news is that, before that indirect call, there's a call to the Control Flow Guard validation function. So I created this simple Python script, which generates a file called "some_data", which is the one requested using XMLHttpRequest, containing our specially crafted fake VBScript object:

Trying to use the same vulnerability to bypass ASLR

To make a long story short, I tried to take advantage of this vulnerability to both bypass ASLR and gain code execution. By playing with the type of our fake VBScript object (the one requested using XMLHttpRequest) it is possible to, for example, convert the dword stored at an arbitrary address to a string with that value in decimal representation. So the vulnerability looked very promising for ASLR bypassing purposes; however, being able to access leaked memory contents from our VBScript code requires us to return from vbscript!rtFilter with a non-negative value, otherwise the VBScript's Filter function won't return the results containing our leaked information. According to my tests, there's an (almost) unsatisfiable condition that needs to be satisfied in order to return from vbscript!rtFilter with a non-negative value: due to the type confusion issue, vbscript!rtFilter will loop through the number of elements of our fake array, assuming that the size of each element of our array is 0x10 bytes (the size of vbVariant); however, the size of each element of our array is 1 byte, since it's an array of vbByte elements. Let's say that we have a crafted array of 10 bytes; element count is 10, element size is 1, so total size is 10 bytes. However, for vbscript!rtFilter, element count is 10, but it assumes that element size is 0x10, so it will loop beyond our array, thinking that we've provided 160 bytes of data, trying to process that out-of-bounds data as Variant objects. There are some chances to overcome that seemingly unsatisfiable condition, like using heap manipulation techniques in order to put specially crafted data after our array of vbByte elements, so when vbscript!rtFilter runs beyond the end of our array it still manages to parse that data as well-formed Variant objects. However, this idea looked like a significant effort to me, so I decided to focus my energy on trying to exploit a second vulnerability from the same MS15-106 bulletin in order to bypass ASLR.

This type confusion vulnerability affecting the VBScript engine can be leveraged to gain code execution in the context of Internet Explorer in a straightforward way; by providing the vulnerable Filter function with a VBScript array with element type different than vbVariant as its first argument, it's possible for attacker-controlled data to get interpreted as a VBScript object, which ultimately leads to an indirect call which gets fully controlled by the attacker. Beyond clearly allowing for remote code execution, this vulnerability also looked promising for bypassing ASLR. However, due to the difference between expected array element size (0x10) and provided array element size (1), I wasn't able to make the vulnerable function return with no error, and that prevented my exploit code from being able to access leaked memory contents. That's why I decided to move on and try to exploit a second vulnerability from the same MS15-106 security bulletin in order to bypass the first hurdle: Address Space Layout Randomization. Oh, and we'll still need to bypass Control Flow Guard if we are hoping to take this bug all the way to remote code execution... So stay tuned for the second part of these blogposts installments, in which we are going to discuss how to exploit a second vulnerability in the MS15-106 bulletin, this time a memory disclosure one, in order to bypass ASLR! Do you want to take smarter steps to reduce the vulnerabilities in your network? Core Impact Pro is packed with hundreds of unique CVEs with more added on a continuous basis. To further expand library of CVEs, Core offers the ability to integrate with open source frameworks, further increasing the amount of unique CVEs offered.