Making something out of Zeros: Alternative primitive for Windows Kernel Exploitation

Making something out of Zeros: Alternative primitive for Windows Kernel Exploitation

While working on the NVIDIA DxgDdiEscape Handler exploit, it became obvious that The GDI primitives approach discussed the last couple of years would be of no help to reliably exploit this vulnerability.

So we came up with another solution: We could map some specially chosen virtual addresses, forcing their paging entries to be aligned just right, and use the vulnerability to write those paging entries.
In short, that would allow us to map an arbitrary physical address on our own chosen/known virtual address.

In the next sections, we will cover details around x64 paging tables and the specific techniques used to exploit this vulnerability.

How Paging works in x64:

X64 paging uses 4 levels of tables to map a physical page to a virtual page. They are PML4 (aka PXE), PDPT, PD and PT.
Control Register CR3 contains the (physical) base address of the PML4 table for the current process.

The following figure is an overview of x64 page walking from Virtual to Physical address: 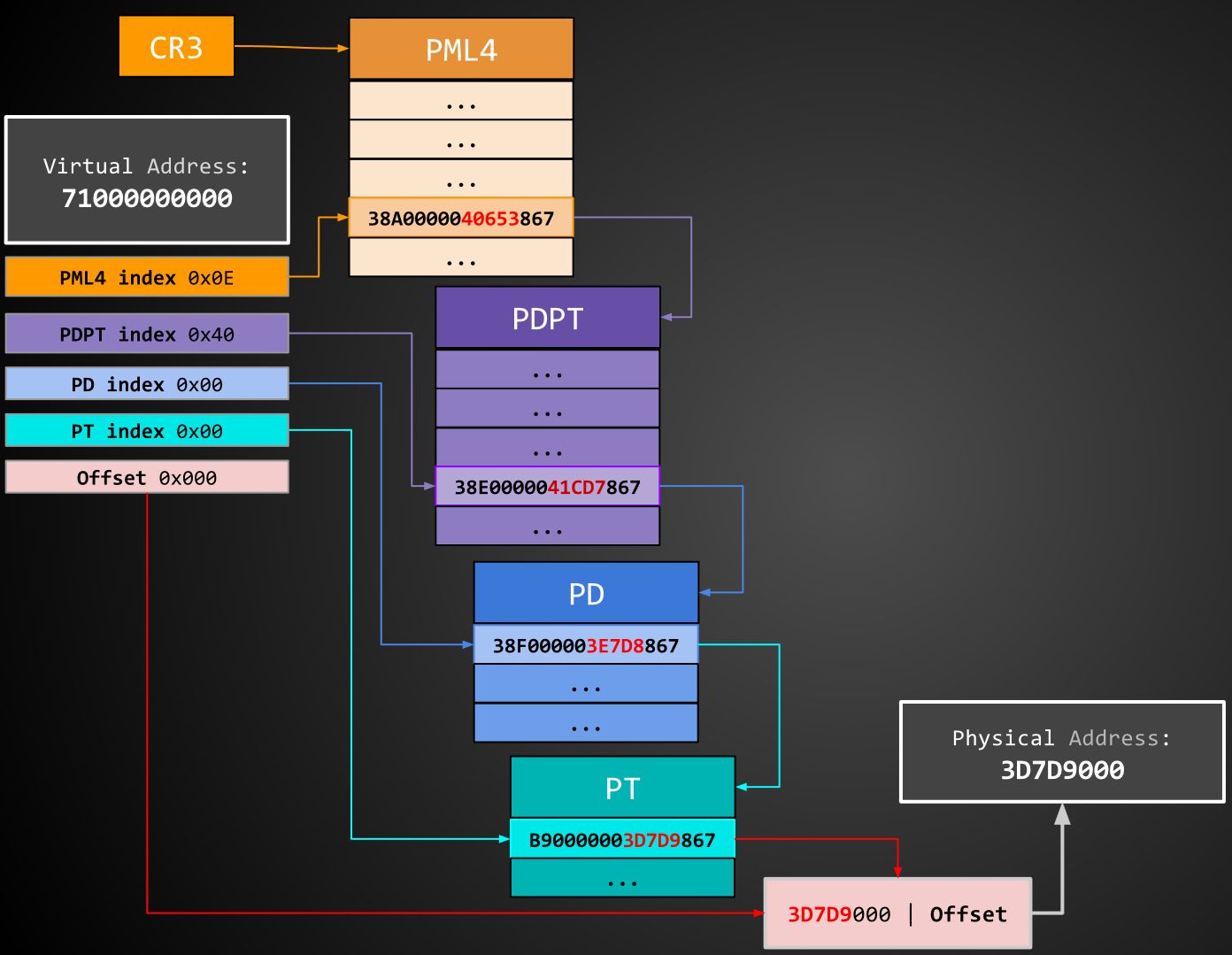 I use this struct to do the job:

Now we have the PML4 entry for our virtual address: 38a0000040653867
This is actually an 8-byte structure known as an MMPTE, and from it we need to extract the Page Frame Number: 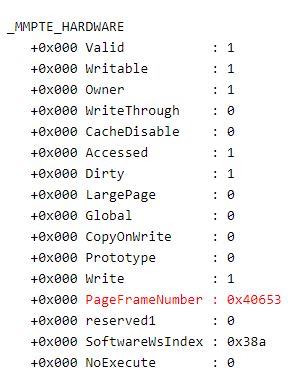 First reported by Google Project Zero. There were a bunch of vulnerabilities in various PDXGKDDI_ESCAPE callbacks. This is an interface for the sharing of data between the user-mode display driver and the display miniport driver.

After some research we decided to focus on the ‘NVIDIA: Unchecked write to user provided pointer in escape 0x600000D’, a vulnerability that gave us the ability to write at an arbitrary virtual address, but with no control over of the data being written or the size of the data. In fact, most of the data being written are zeroes, and the code forces a size check that only allows us to write a minimum of 0x1000 (4096) bytes.
Original PoC: https://bugs.chromium.org/p/project-zero/issues/detail?id=911&can=1&q=NVIDIA%20escape

The lack of control over the data being written or its size forced us to discard the GDI primitives we've been using lately, so we figured we would need to do something different.
A solution emerged (on Windows builds earlier than Anniversary Edition), by abusing the fact that paging tables discussed in “How Paging in x64 works” ALSO reside in a region of Virtual Memory sometimes called "PTE Space".

By some bitshifting and masking, we are able to calculate the virtual address (on PTE Space) of each of the tables for any given Virtual Address.

We can confirm this by using Windbg or Kd:

At this point we have all the elements needed to draw an attack plan:

- Vulnerability allows us to write a bunch of zeroes to an arbitrary virtual address.
- Paging entries in PTE Space can be written by the vulnerability.
- Tampering with a paging entry's PFN could allow us to map any physical address.

At this point, our primitive is setup and ready.

Here are some macros to do that.

This animated graph shows an overview of the Remapping mechanics:

1) Preserving the _MMPTE flags. We need to preserve at least 3 of the 12 bits of flags intact to be able to read/write our spuriously mapped page from ring3.

3) This is a little more complex and hardware/os dependent. Paging structures are cached in the TLB (Translation Lookaside Buffer) for performance reasons.
After using our mapping primitive we need a way to invalidate or flush the TLB, or else the changes made to the paging tables are not going to be immediately propagated (since the old values are cached).

The way we try to force Windows to trigger a TLB flush seems to be very hardware dependent. On some processors, a page fault could be enough to force a TLB flush, on others a task switch (CR3 reload) is required, and in some cases, even that isn't enough and may require an IPI (Inter-Processor Interrupt).

The way I solved this (though not 100% reliable) is to try all of the above.

4) We are required to know the actual physical address of the PML4 table (the value of CR3) otherwise it would not be possible to remap a target virtual address to the one under our control.

To start walking the paging tables we are _required_ to know the physical address of PML4.

On newer hardware, we could use Enrique Nissim's technique to guess our PML4 entry on latest Windows 10 editions.
(check Enrique's paper and code here: https://github.com/IOActive/I-know-where-your-page-lives)

But, we'll focus on older hardware/windows versions (Windows 7/8/8.1 and 10 Gold) so we can solve this by using brute force.

We can query the registry for valid physical address ranges. (take a look at HKLM\HARDWARE\RESOURCEMAP\System Resources\Physical Memory) 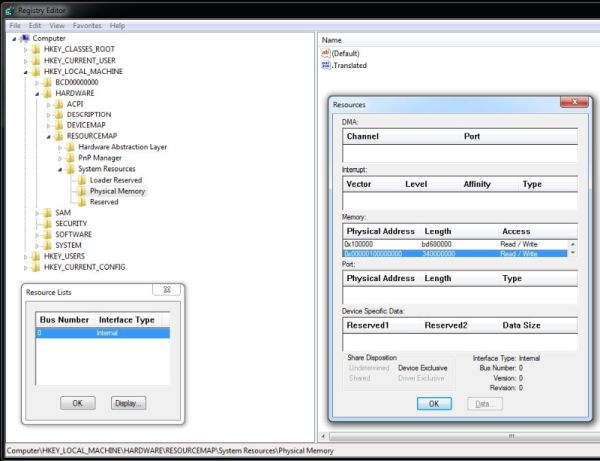 For simplicity, I'll assume the largest range in there is RAM (though this won't be the case 100% of the time).
We can then try every physical page in that range until we find one with the correct PML4 self reference entry (at index 0x1ed).

5) We won't be able to walk EVERY paging entry to the point of recovering a final physical address.
Memory paged out to the pagefile is an issue, so are memory mapped files, and so are other flags deferring
the real value of the PFN. Luckily this doesn't seem to affect our scan of the PML4 base.

6) Fixing the PFN database and Working Set List is a Catch 22:

After successfully exploiting, if we were to terminate our exploit process the machine would BSOD.
The Windows memory manager is going to try and reclaim the now unused pages, and while at it
would hit our non-matching entries in both the PFN database (nt!mmPfnDatabase) and the processes
Working Set (EPROCESS->Vm->VmWorkingSetList->Wsle).

We could walk the PFN database looking for an MMPFN entry who's PteAddress matches our page entry address.
That would give us back the original PFN and the correct WsIndex for our tampered page. That's enough data
to restore our entries back to normal behavior.

The bad news is, in reality, as soon as we restore one of our two tampered paging entries (ADDR1a or ADDR2a)
back to their original state we would lose the read-write primitive, thus making it impossible to fix both
entries by this technique alone.

The way I solved this problem is by combining this technique with the one described in "Abusing GDI for ring0 exploit primitives".
Use the Paging table primitives to corrupt a bitmap, and from that use the GDI primitives to restore our relevant mmPfnDatabase entries.

This was a hard vulnerability to exploit given the constraints on the bug, the fact that the real hardware was needed (no virtual machine debugging possible),
and the added instability provided by the Windows Working Set trimmer trying to do its regular job.

We hope this technique, albeit incomplete and sort of already out of fashion, could still be of use to other exploit developers.